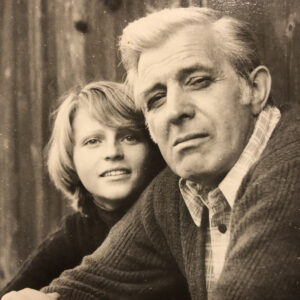 Our grandfather was still with us even once he was long gone. He is mentioned in every family gathering a good 40 years after his death. One person remembers an anecdote; another finds a photograph or document that sheds a completely new light on this figure.

I myself have only a few memories of my grandfather. One is from when I was a few years old and collected daisies for him in the garden next to our house. My family remembers him on the one hand as a gentleman, on the other as a bold visionary; a person entirely unsuited to the times he came to live in. He had his workshop, secret projects, and since he didn’t like to show off, not to mention talk about his new ideas, he was considered mysterious.

It’s with him that the story of Révolte begins. Because revolt and independence is in the blood.

Subcarpathia, the 1940s. A boy from a traditional good home decides to marry a girl from the neighbourhood. ‘Mismarriage!’ his family protests, but even then my grandfather knows better. Right after the war he starts studying Economics in Kraków and opens a private chemist’s shop for his wife in their family village. The economics graduate has his hands tied in the new regime. There is no stock market, no financial corporations, and there’s only one bank. At best he can become a civil servant.

But my grandfather searches for his own path. An opportunity arises together with the Khrushchev Thaw after the death of Stalin. He moves to Kraków together with his wife and first son and starts to design, then produce, specialised measuring equipment not made by anyone else in Poland. How a man in his twenties without any knowledge of engineering knew how to produce such equipment, and above all how he came up with such an idea, is a mystery to all to this day.
Regardless, he quickly receives more commissions than manpower. Devices for the measurement of the temperature of water used to cool the first Polish nuclear reactors, curiously named ‘Maria’ and ‘Ewa’, are made here, at Wiślna 4, in a quiet workshop by the main square of Kraków. My grandfather supplies the Polish Air Force with equipment for measuring exhaust fumes in aircraft engines and receives orders from shipyards in Gdynia and Szczecin for equipment used to measure humidity and temperature in cargo holds.

The period of prosperity doesn’t last long. After all, individualism is a crime. The authorities are concerned by the fact that a single person equips the most important factories in the country as well as half of the fleet. They give my grandfather a big fine and limit his number of monthly orders, which leaves the family on the verge of bankruptcy.

My grandfather’s problems with the authorities at the time don’t end here. A set of equipment necessary for building a ship for the USSR is kept on Wiślna Street. The delivery of the ship is delayed, so the matter is brought to the attention of the then Minister of Industry, who can’t believe that the Polish shipbuilding industry and, more broadly, relations with Moscow are dependent on ‘some private supplier from Kraków’. This time my grandad ends up in prison.

He is released after half a year and, as if nothing happened, applies for a passport. The official story goes: he needs a break. His family will find out his real intentions many years later. In his application, he writes that he wants to visit his brother in the States whom he hasn’t seen in years. And since he has three children, the authorities don’t cause him any problems.

He embarks on his journey from Gdynia aboard the Batory ship dating back to the interwar period. He sails first-class and wanders around the ship in impeccably tailored shirts. We will later find out from his friends that he became the life of the party and bought his fellow passengers drinks.

Things are no different in the States. Grandad quickly befriends the crème de la crème of the Polish diaspora, including one of President Nixon’s advisers. As a gift for his brother’s wife, he brings back a fanciful lamp with a bent brass leg, ceramics and glass. Even his family doesn’t know that it’s one of his first own designs. He returns to Poland with new ideas.

Beautiful objects were always my grandfather’s passion. He was a true dandy, which was rare in those days; a regular customer of Moda Polska; and his daughter-in-law (my mother) remembers to this day that her first ever perfume and proper handbag were gifts from him. He bought his wife such tasteful and timeless jewellery that it is now worn by a third generation of women.

After returning to Kraków, instead of putting his tail between his legs and looking for a peaceful office job, my grandad starts another business. Spending time with the Polish diaspora he came to understand just how many of its members who emigrated a long time ago, before the War, dream of returning to their homeland in their old age. So he starts brokering land in Poland. The authorities do not like this either – after all, the Cold War is still going. As always, grandad starts to realise another crazy idea. This time he opens a factory that offers handmade lamps of his own design.

Art deco, rich ornamentation, ceramics, brass ¬– the lamps do not conform to the grey reality of communist Poland with its Plattenbau blocks of flats or furniture and lampshades made of wire and covered with fabric. Soon people start coming from all over Poland to buy his lamps. In the small workshop on Wiślna Street, illuminated to the brim and smelling of resins, lighting is produced for such institutions as the library of the Pedagogical University and the headquarters of PKO bank on Krakow’s Main Square. And although my grandfather is no longer with us, his lamps hang there to this day.

When I started creating Révolte, the figure of my grandfather Dominik kept returning to me again and again. It took me years to develop the conviction that independence and doing things your own way are positive, not negative traits. From my grandfather I also inherited the love of beautiful objects, precision and craftsmanship.

One more thing: the first place in which you can purchase Révolte is the Hotel Europejski in Warsaw, inextricably linked with art. When deciding to work with HE Concept Store, I wasn’t aware yet that many years back it used to be my grandfather’s favourite hotel, which he always stayed in whenever he travelled to the capital. Here’s another puzzle piece connecting me to my grandfather, whom I never really had the chance to get to know.

In the photo above: my grandfather Dominik and my mother.